.(JavaScript must be enabled to view this email address)

Haili Hughes is an experienced teacher and mentor who is passionate about keeping excellent teachers in the classroom, where they make the most impact on young people. She is determined to improve teacher retention rates through the support of high-quality mentors.

This is me. I am not ashamed to say, I am probably the least 'down with the kids' person in the entire world. I once even called 'Snap Chat,' 'Chat Snap' - to the great hilarity of my pupils. 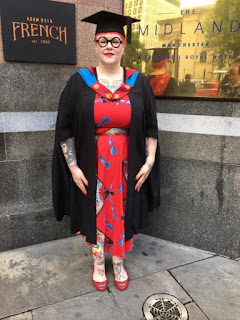 So it was with a small amount of trepidation that I decided to follow in the footsteps of some of the fabulous educators I follow online and to dip my toe in the river of rap as a way of helping students develop their skills of analysing unseen poetry. Of course, I have used song lyrics for this purpose before - but I always stuck to bands I liked. I have a brilliant series of lessons on Smiths' lyrics which I may blog about some other time. But after stumbling across some resources on Iambic Pentameter and Eminem, I thought I would give it a go.

I can't take any credit for coming up with the idea of the two songs I started out with - my resources were based on a PowerPoint from TES here. Analysing Tupac and J. Cole together worked really well as although they mention similar issues in both of the songs, one has a much angrier tone. I sometimes find mood and tone is something which my pupils have particular difficulty commenting on, so this helped them to understand what sort of comments I was looking for.

My year 10 class particularly loved the comparison between the following lines:

"It ain't a secret, don't conceal the fact
The penitentiary's packed and it's filled with blacks" In Tupac

"Asking the Father for forgiveness, got 'em overwhelmed (Please, God, I want to go to Heaven)
As if He's spiteful like them white folks that control the jail" in J. Cole.

These lyrics in particular gave an opportunity for a rich analysis of tone and the nuances of using particular words. They picked up on the plosives in Tupac's "penitentiary's packed" and commented on how he is angry but seems to possibly place the blame on the police or authority/government/society. Whereas, the use of "spiteful" and "control" more directly blame white people as an oppressive race. I live in a very white area, so it was refreshing to hear pupils talk thoughtfully about colonialism and hearing them consider the daily struggles of POC.

This also led to an interesting discussion on police brutality both in this country and the US. It would have been a brilliant opportunity to do some interleaving to Language Paper 2 skills here as there is an excellent Reggie Yates' documentary about race riots in the USA, where he follows a young black male who is arrested for having sagging pants. There is a clip here which would be really great stimulus for doing some transactional writing.

After this introduction, I did a lesson on Stormzy, using his song 'The Crown.' We started the lesson with this picture on the board: 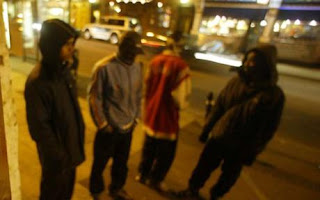 I asked students to write five adjectives on a post it note to describe how they would feel if they were walking down the street and saw this gang and to stick their post it notes onto the white board when they were finished. A student volunteer then came to the front and read out some of the answers. Unsurprisingly, many of the adjectives were quite negative and we spoke about why that might be. One student spoke up about how this was unfair and that the picture just looked like most teens on a Friday night as there is nowhere to go and that society unfairly judge teenagers in hoodies by stereotyping that they are all causing trouble.
I then gave each row a newspaper headline I had printed out about teenagers. I found these by just doing a quick Google search, but they included ones such as:
EXCLUSIVE: Mob of schoolboys 'fuelled by VODKA from a pre-GCSE exam party' destroyed treasured model railway exhibition, claims 'mortified' mother
- or -
Bike yob crashes into a Mercedes as he does WHEELIES while weaving through traffic - but then surrounds the motorist with mob of friends as they blame the DRIVER
Each row discussed the connotations of how teenagers were being presented in the press and whether they thought it was fair that as teenagers themselves, they should shoulder the blame for how all teenagers behaved. This set the tone up really well for analysing 'The Crown' as in it, Stormzy raps about his frustration with having to be the voice seen as representing all young black males. The YouTube video is here.
I am not a huge fan of acronyms, but until my class is confident, I have given them a structure to analyse unseen poetry using TILL: Title, Ideas, Language, Layout. Once they become more confident, many will no longer need it. So, when analysing the lyrics, each member of a group of four worked alone to take responsibility in exploring an element of TILL in the lyrics and then came together to team teach the rest of their group what they had come up with. Through this discussion, they could then annotate the lyrics with different layers of meaning as some disagreed on what things could suggest.
I felt it was a really useful activity, which will lead in nicely to analysing the Power and Conflict poetry next half term. One of the kids even called me "fresh" which I am saving in the compliments bank for the next time I say something embarrassing.

For the last few years I have been on an almost biblical style mission to increase challenge in my lessons. This came from my feeling that after the 2015 reforms, I had somehow de-skilled myself in the art of achieving those top grades; I had taught a succession of lower sets for years and the standards seemed to have shifted so much that I wasn't really sure what they were looking for anymore.

Then in the July, I received my timetable and with delight, I saw that I was going to take my amazing, bright, politically engaged year 9 class through GCSE. This is where my mission got turbo-charged. I wanted to ensure that these kids got the best possible grades they could and to facilitate this, I needed to know my stuff.

I went on pilgrimages to as many regional AQA meetings as I could, so that I felt I completely understood what the mark scheme was looking for, engaged with other professionals on social media and used the guidance in the EEF's Metacognition and Self-Regulated Learning report - I wrote about this here.

Most of the work I have been doing recently has been based around guiding students on how they can achieve that elusive 'conceptualised' response in English Lit that embodies a Grade 9 essay. Much of the reading I did online about getting into the top band talked about students using thesis statements to come up with a conceptual idea for question responses so I did some reading about thesis statements and realised that they may just be what I was looking for.

One of the journals I read said: "Living in a world of globalization, communication of various forms has become crucial. Should it be of a colloquial or formal use, language plays a vital role in our lives. As in every other area, communication is the lifeblood of academia. Therefore, argumentative discourse is of an essential nature to both scholars and students" (Bërveniku, 2017). So, I knew that I needed to make my students see that 'conceptualised' just meant to come up with a thread of an argument and follow it through the rest of the essay.

This was strengthened after reading the AQA Examiner's report in August. Here is just a snippet.

We started out by looking at what a thesis statement is and tried using a thesis statement generator I found here. But my class found this to be quite complicated, so instead I decided to use @shadylady 'What/How/Why?' structure to generate our own thesis statements. Becky is amazing and you can find her blog here and Twitter account here. The students were already used to this structure as they had been using it to structure their analytical paragraphs rather than a PEE/PETAZL/PEEL structure. I had long thought that this rigid structure was more of a hindrance to high ability students and this was confirmed in the AQA Examiner's report where it said:

We are currently studying A Christmas Carol, so, we looked at the question: "Starting with this extract, explore how Dickens presents redemption in A Christmas Carol." We had already done quite a lot about this theme, so as a 'do now' starter activity, I got them to spend ten minutes as soon as they came into the room to consolidate what they know about redemption in the novel; they then had a lot of information they could draw upon to create thesis statements.

When we were all happy with being able to generate our own thesis statements successfully, we looked at how they could be used as a road map for an essay. I explained that each point that was made in the essay needed to be linked to the thesis statement, so it wasn't just an idea, it was a concept that they needed to persuade their reader was true. We looked at an essay and highlighted the thesis statement. We then highlighted where in the essay the student made reference to the concept they laid out at the beginning. I felt that having done this, the pupils really understood what I meant about a thesis statement guiding their response. The essay can be found here. 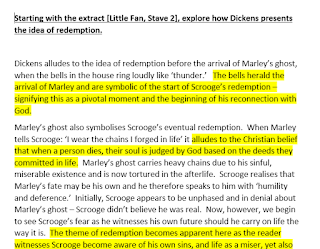 Now, I wanted pupils to come up with their own thesis statements for the redemption question, so I asked them to produce concept maps with their thesis statement written in the middle and around it they could include anything they could write about in their answer. For guidance, I set them the challenge of including some of the following things in their map:

Here is one of the maps they produced. 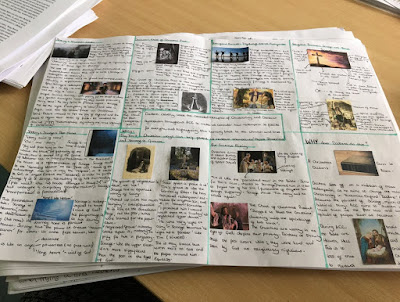 I was really pleased with the results and will be embedding this approach further as we revise the other Lit texts in the run up to the exams.